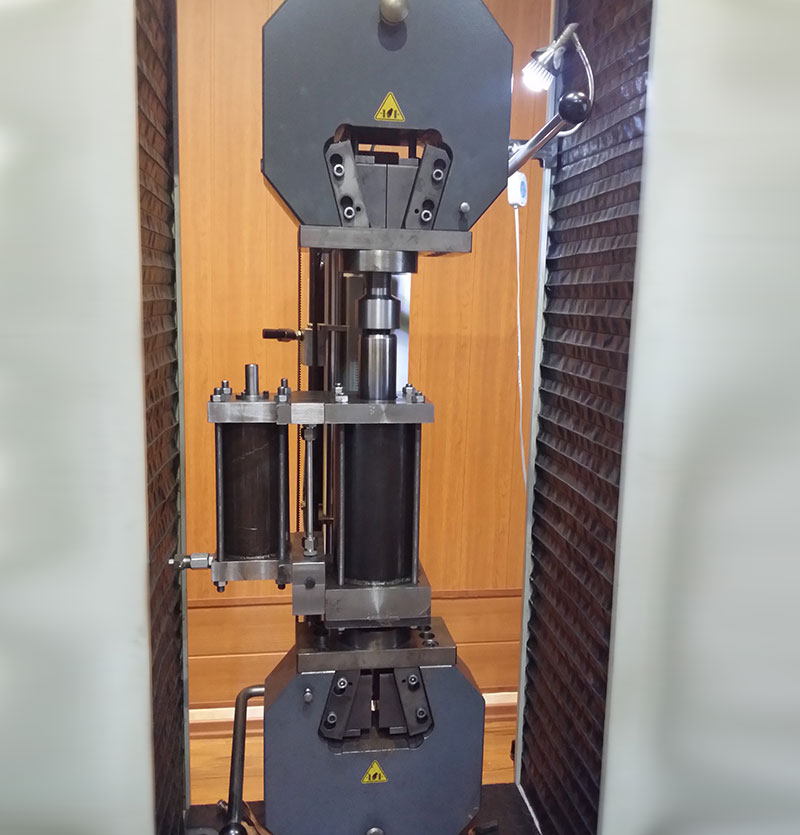 We are utilizing the newest designation, modern construction processes and optimized solutions for manufacturing the various piping supports and related equipment, in KARAJET Company. Here are summarized information about pipe support product groups and their specific characteristics.

Snubber or Shock Absorber is a tool designed to guard components against shock or sway due to seismic disturbances, turbine trips, valve discharges, earthquakes, and water hammers. Whenever unplanned dynamic activities occur, those restraints will be responsible for protection of the piping and different components from damage.

The layout of a Snubber allows gradual motion caused by thermal expansion of a pipe or other components in normal operation conditions, however, restrains them from any sudden motions. Snubbers are designed particularly to absorb sudden changes in the load of the pipe and dampen any oscillation that may occur. These restraints are not meant to hold the pipework in place and should not be used the same way as pipe supports.

A snubber is a seismic restraint device that conceptually functions much like the restraint mechanism of a seat belt. Both snubbers and seat belts allow slow movements but provide restraint against rapid motion. A snubber will not restrain the slow thermal expansion of piping but will provide active resistance against rapid motion resulting from an earthquake or waterhammer.

Snubbers are available in a wide range of sizes from very small units on smaller lines to units weighing tons used on steam generators. There are generally two types of snubbers are in use. The hydraulic type, which depends on the flow of a fluid through a valve or orifice until the valve, closes or the flow is choked in the orifice. The mechanical type, which is a device where movement of a piston leads to rotation of a screw or a roller in a screw. Again, rapid movement results in activation.

The hydraulic snubber consists of a double-acting cylinder, a flow cortrol-device, and, in most cases, a hydraulic fluid reservoir. An alternative to the external reservoir type snubber is one using an orifice with high fluid resistance within the piston where fluid does not pass through external hydraulic controls or reservoirs. This design is simpler and more compactly constructed than the design with-external reservoirs.

The hydraulic snubber has two types of design

The function of this hydraulic snubbers is controlled by a main control valve (B) positioned axially in the hydraulic piston (A). On slow displacement of the piston the valve is held open by spring force and the hydraulic fluid can freely flow from one cylinder chamber into the other. On rapid piston displacement above a velocity limit (approx. >2mm/s), back pressure develops on the valve disk and closes the valve. The hydraulic flow is interrupted and the displacement blocked. On displacement in pressure direction, the compensating valve (D) also closes almost synchronously with the piston valve. To balance the piston rod volume, as well as to change the volume of hydraulic fluid on change of temperature, volume compensation via a co-axially arranged compensating reservoir (C) takes place. The compensating valve (D) regulates the connection between reservoir chamber and the working cylinder 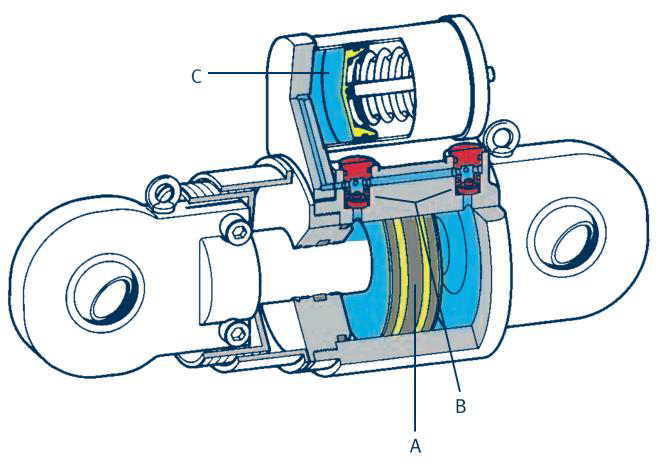 In this design the particularities of size require a different arrangement of the compensating reservoir (C). At the same time a different arrangement of the valves are also necessary. The valves (B) work similarly to those before. Here too, the flow of hydraulic fluid in the respective direction of movement is interrupted by closure of the corresponding valve if a certain limit of velocity is exceeded. As both valves stand with the given arrangement indirect connection with the compensating reservoir, an additional compensating valve is unnecessary.

Hydraulic snubbers are velocity controlled. Acceleration control is more common in mechanical snubbers. Mechanical snubbers usually consist of a motion-sensing device, an activating rod, and a braking mechanism. Braking devices may be included to limit motions of the movable rod end. Such snubbers are activated by a progressive increase in load (force) with the increase of rod motions through a gear mechanical escapement or, a braking action applied on a rotating mass threaded to the active rod.

Typically, snubbers are used on large components such as steam generators, valves, pumps, and pressurizers and on safety-related piping systems. Many snubbers are virtually inaccessible as they may be high above floor level or within a maze of piping or inside a nuclear plant. There are no definitive ground rules that permit the prediction of where snubbers will be in a specific plant. The industries, which use snubbers more often, are: