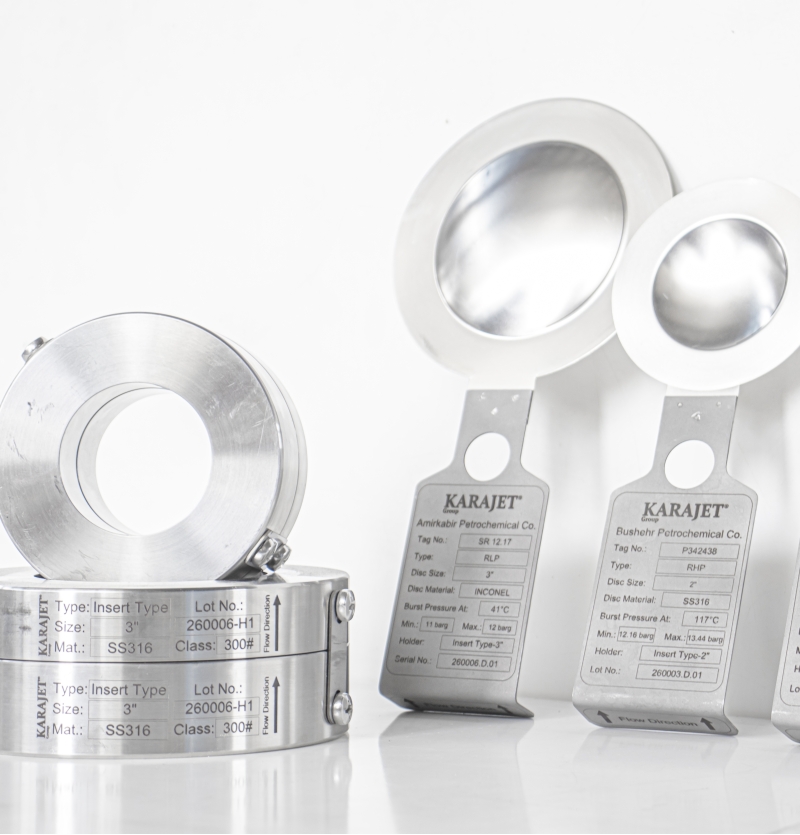 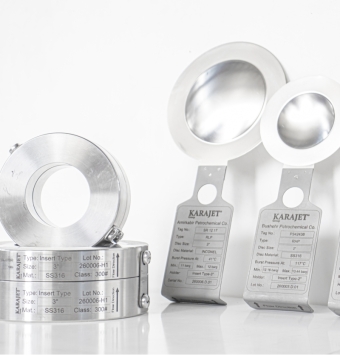 What is Rupture Disk?
Overpressure and vacuum is feature of virtually every production process. If the pressure rises above or falls below the specified limits, major damage to plant components may result. The consequences are production standstills and serious commercial losses. A reliable and fast reacting pressure relief system is therefore essential to protect the plant in case the pressure rises above or falls below these limits.

What is a Rupture disk?

A rupture or bursting disc is a non-reclosing pressure relief device also actuated by inlet static pressure and designed to function by bursting a fragmenting or non-fragmenting bursting device.

A rupture disk is a type of sacrificial part because it has a one-time-use membrane that fails at a predetermined differential pressure, either positive or vacuum. The membrane is usually made out of metal, but nearly any material (or different materials in layers) can be used to suit a particular application. Rupture disks provide instant response (within milliseconds or microseconds in very small sizes) to an increase or decrease in system pressure, but once the disk has ruptured it will not reseal. Major advantages of the application of rupture disks compared to using pressure relief valves include leak-tightness, cost, response time, size constraints, and ease of maintenance. 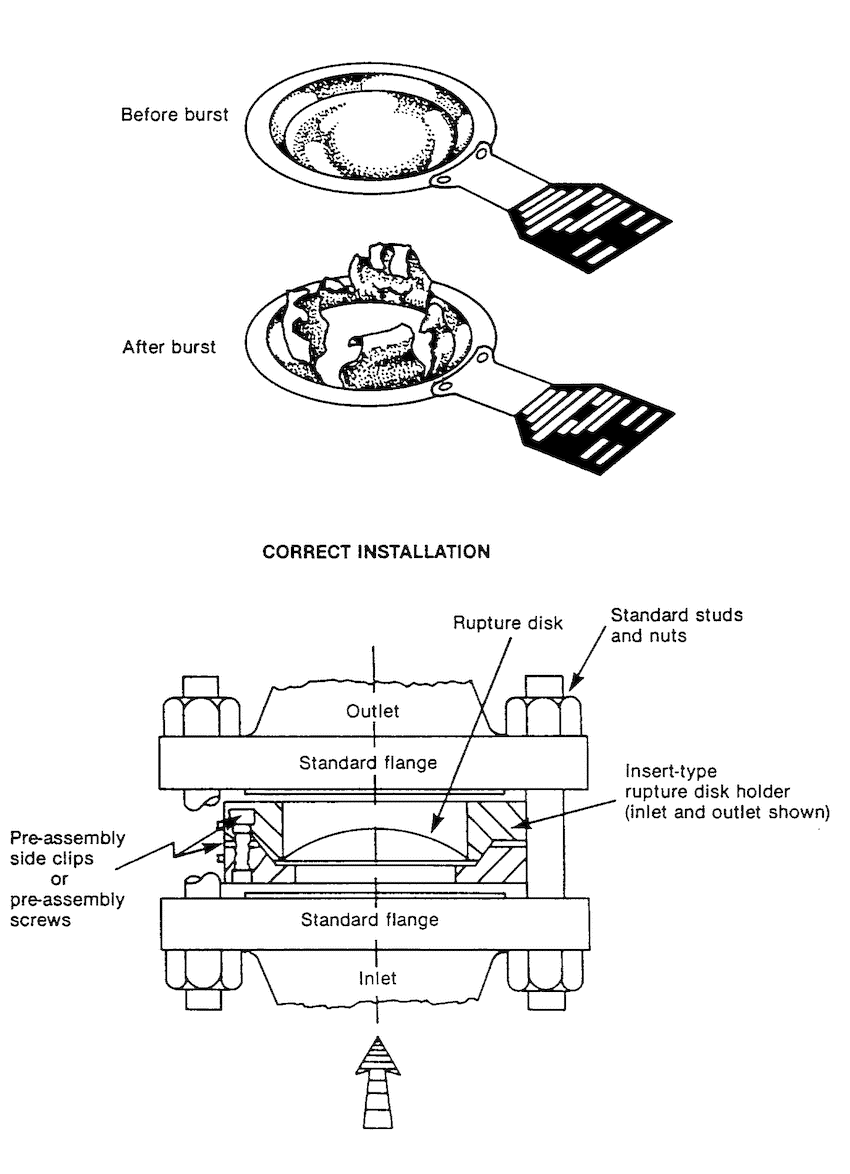 Where do we use Rupture Disks?

Rupture disks are commonly used in petrochemical, aerospace, aviation, defense, medical, railroad, nuclear, chemical, pharmaceutical, food processing and oil field applications. They can be used as single protection devices or as a secondary relief device for a conventional safety valve; if the pressure increases and the safety valve fails to operate or can't relieve enough pressure fast enough, the rupture disk will burst. Rupture disks are very often used in combination with safety relief valves, isolating the valves from the process, thereby saving on valve maintenance and creating a leak-tight pressure relief solution. It is sometimes possible and preferable for highest reliability, though at higher initial cost, to avoid the use of emergency pressure relief devices by developing an intrinsically safe mechanical design that provides containment in all cases

Rupture Disks are essentially used in processes with low to high pressures, high operating temperatures and considerable pressure oscillations. The scoring is located on the atmosphere side of the rupture disc, while the process facing side has a smooth finish so that adherence of the medium is prevented. Rupture discs for pressure relief are round or square, consist of one or more layers, and are either flat or domed.Many rupture discs are equipped with breaking points which are created for example, by means of lasers. These can be simple cuts or even special geometries. This part of the rupture discs is known as the rupture element.

Different applications require different types of rupture discs. They are made of metals or plastics, from one or more layers, and they can be domed or flat. Domed rupture discs either have the dome towards the process, or away from the process. Within these different varieties, there is a broad range of possible combinations. For example, plastic film is sandwiched between metal layers for triple section rupture discs, in order to reach even the lowest burst pressures. The materials used range from various stainless steels to higher quality materials such as Inconel, Hastelloy, or Tantalum, and all the way up to coatings or plastic liners such as PTFE or FEP.

Rupture discs are either installed directly between flanges, or inserted into a corresponding rupture disc holder, which is then mounted between flanges. In some cases the rupture disc is already soldered or welded into the holder by the manufacturer. These holders are then fitted with the necessary connections, e.g. thread (NPT, G or customer-specific thread, connection systems (e.g. VCR) or various flanges (ISO-K, KF, ISO-F, and CF)).

A large number of rupture discs and other safety devices are installed in industrial plants. A broad range of signaling options are available, to immediately receive information about the triggering (opening) of a rupture disc. The easiest way to achieve this is with a tripping wire which is fixed on the rupture disc, and is connected to the process control system. With the opening of the bursting disc, the wire breaks, the circuit is interrupted and the triggering of the rupture disc is communicated to the process control system. If there are particularly high demands for leak-tightness, non-invasive signaling methods (e.g. magnetic proximity sensor NIMU) are used.

Rupture disks installation can be  alone or in combination with other types of devices. Once blown, rupture disks do not reseat; thus, the entire contents of the upstream process equipment will be vented. In KARAJET, Our rupture discs are mounted in the holder directly between standard flanges according to EN 1092 or ASME B.16.5 .Rupture discs are used for their superior properties for example in reactors, pressure vessels and gas cylinders either as sole pressure protection or in combination with a safety valve

If we want to talk about the Rupture Disk function we could express that If the pressure exceeds the permissible range during the process, the rupture disc ruptures. Thus the pressure can be released immediately

The holder Assembly is available in nominal sizes ranging from 1″ through 36″ for installation between ASME class companion flanges. Standard materials for the holder include 316 stainless steel, carbon steel, Alloy 400 and Alloy C276.

The flexibility of our holder assembly enables employment of various rupture disc types and burst pressures. Thus, the type of rupture disc can be changed rather than substituting the entire holder.

Primary Relief
If used for primary relief, the rupture disk is the only device utilized for pressure relief. As such, it has the advantages of being leak tight, an instantaneous response time, minimum pressure drop, lowest cost, very high re-liability, and minimum maintenance. It has the disadvantage that it must be replaced after each rupture occurrence, and allows venting until system pressure equals downstream pressure.

Secondary Relief
When used in a secondary relief capacity, the rupture disk provides a backup vent to a primary relief device, usually a Relief valve. Its purpose here is usually to provide additional protection against an unlikely but possible major event that would exceed the capacity .of the primary relief device

What must be observed when selecting a Rupture disc?

Reliable and economical rupture discs are not standardized products, but are always individually tailored to the respective process conditions. Numerous parameters are taken into account for the manufacture of rupture discs, in order to ensure optimal function.

These include, for example:

As a summary, if the correct SRV is selected for the right application, the only, but important, remaining major factor of selecting only a rupture disc is price, because the loss of product after opening is not an issue. Therefore, a short cost comparison between comparable stand-alone rupture discs and SRVs is need.

Rupture disc manufacturers burst at least two discs per lot before shipping them to a customer. As a consequence, even if you want just one rupture disc, you will be paying for three. Therefore, the first usable rupture disc is comparatively expensive. Also, for new installations each installed rupture disc must be purchased along with a disc holder. This holder basically consists of two flanges between which the rupture disc is held. Disc holders are typical for specific manufacturers and are not interchangeable. The same holder may only be used for replacement purchases as long as you buy the exact same rupture disc from the same manufacturer. So the disc type and holder are pretty much a set.

Below is a capital cost comparison between a rupture disc manufacturer and SRV manufacturer based on 2008 pricing, which is not expected to vary a lot in the future.

This cost comparison will of course vary considerably with size and material of construction and type of selected SRV, but you get the point. However, please note that everything has a value and the loss of contents should also be considered in the overall cost difference between a rupture disc and an SRV. Therefore, in a lot of cases, we will find the rupture disc upstream and/or downstream of an SRV when:

Economic considerations: If the system is a corrosive environment, a rupture disc with the more exotic and corrosion-resistant material can be selected upstream and downstream of the SRV. It acts as the barrier between the corrosive system and the relief valve.